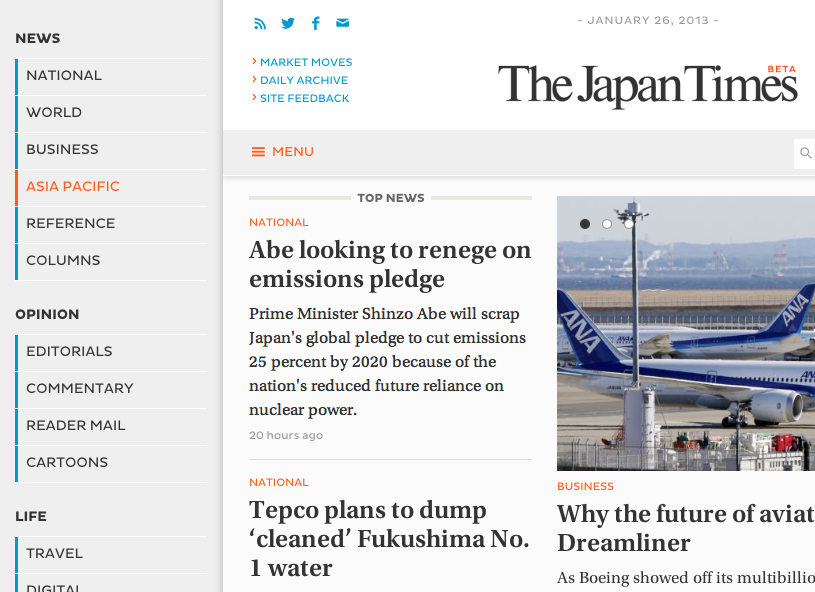 We greatly enjoyed creating the new The Japan Times website and were humbled with the spirit of collaboration and openness for creativity at JT.

The Japan Times new website was launched on Wednesday, 23th January 2013 at 22:20 (JST). We are in touch with JT for more than 1 year about this project, actual design and development work took more than 7 month to complete. This is also a new milestone for Bento Graphics Inc.

This is just a quick notice and more information on the site features will follow soon, in the meantime see the official FAQ.

Note, the new responsive JT website is still in Beta stage while we fix bugs or add requested & new features. We are thankful for your bug reports and general site feedback.

For the official launch announcement see this post:
JTO 2.0: Into the future of new media.

The newly redesigned (and responsive) site for The Japan Times is just, well, fantastic work: japantimes.co.jp /via @bentographics

The Japan Times, full renewal!The first major newspaper in Japan (or even in Asia maybe?) to go with a full … tmblr.co/ZltqYydNz-cf

japantimes.co.jp is a beautiful responsive site and using WP, got a lovely menu for mobile devices

I quite like the new layout of @japantimeswebsite. Nonintrusive and legible, increasing readibility. japantimes.co.jp Leave beta soon!

Excellent example of a responsive website. The Japan Times buff.ly/Td3Izr (drag the bottom right corner of your browser to the left)

The Japan Times has redesigned their Web site and the new look is really nice. It’s really a major improvement. japantimes.co.jp

Loving the new look of the @japantimes_life website. Cleaner, lighter, and reader-friendly.japantimes.co.jp/life/food/

Check out The Japan Times’ new responsive design site — on whatever device you’re on. – ow.ly/hdDw4

@bentographics Hi, love the responsive design of Japan Times, for me the best responsive news website in the market

@aexmo I bet you love the japan times website the responsive mob are citing as best in class then. It’s scrolltastic on the iPhone.
— Ian Fenn (@ifenn) January 31, 2013